Discover the history of UK aviation on this unique tour that combines 11 different heritage aircraft museums and collections with visits to some of southern England’s most popular tourist destinations. Visit the RAF Museum in London and the world-famous Shuttleworth Collection. Stop-off at IWM Duxford, Newark Aviation Museum and the Fleet Air Arm Museum at RNAS Yeovilton. Visit the De Havilland Aircraft Museum and head to Lincolnshire in the east of England to see two of the world’s three remaining Lancaster Bombers. In between there are opportunities to see Stonehenge, Salisbury Cathedral, the picturesque Cotswolds and the university city of Cambridge. We end the tour with a day to explore London.

Arrive at LHR where you meet your tour manager. Start your Heritage Aviation tour with a visit to the FAST Museum in Farnborough and learn about aviation history. In the museum you will see photographs and exhibits from the early years and important pieces of aviation history, including Sir Frank Whittle’s earliest jet engines, a full size replica of the Cody Flyer, and research models of Concorde. Continue to Salisbury and check-in to your hotel. Rest and relax before your welcome dinner at the hotel.

Start your day with a tour of the Solent Sky Aviation Museum, formerly the Southampton Hall of Aviation Museum, which showcases the international importance of aviation history in Southampton and the Solent area. See over 20 airframes on display from the golden age of aviation, including the Spitfire and the record-breaking Supermarine S6; and enjoy the thrill of sitting in jet fighter cockpits! In the afternoon, travel back to Salisbury and explore its narrow alleys full of medieval houses and quaint inns. Finish your day with a guided tour of the magnificent Salisbury Cathedral.

After breakfast, travel to Stonehenge, one of the wonders of the world and the best-known prehistoric monument in Europe. The afternoon is spent at the Fleet Air Arm Museum at Yeovilton. Learn the story of the men, women, aircraft and ships who have served with the Fleet Air Arm, the flying arm of the Royal Navy since the early twentieth century.

Cotswolds and the Wellington Aviation Museum

Go on a Cotswolds tour today and discover the spectacular beauty of this unique region. The combination of country roads leading through peaceful river valleys, country towns and villages of honey-coloured stone, complete with manor houses, churches and traditional pubs makes it a perfect destination. In the afternoon, visit the Wellington Aviation Museum, a small museum dedicated to all those who served or who passed through RAF Moreton-in-Marsh. Examine the vast range of artifacts from the war years and beyond including propellers and wheels, the tail section of one aircraft and numerous books and paintings signed by past personnel. Many of the items are donated to the museum from families of, or people stationed there.

The Newark Aviation Museum and the Battle of Britain Memorial Flight

Travel to the Newark Aviation Museum, the UK’s largest independent aviation museum and home to a rich collection of airframes, from the beautiful Hawker Hunter F1 to the menacing Warsaw Pact Floggers. The mainstay of the collection is Cold War jets. The airframes are displayed in two large halls and various outdoor locations around the site. The placing of the external aircraft is carefully thought out and ideal for photography! Then on to the Battle of Britain Memorial Flight at RAF Coningsby to see the only airworthy Lancaster Bomber in the UK.  This aircraft is joined by a unique collection of Spitfire, Hurricane and Dakota aircraft and of course the Visitor Centre.

Overnight at the legendary home of the 617 ‘Dambusters’ Squadron.

Visit the largest Bomber Command museum in the country and relive a World War II bomber airfield at East Kirkby. Experience the sights, sounds, smells and atmosphere and see the Lancaster Bomber named ‘Just Jane.’ This Lancaster cannot fly but there are opportunities to ride in it as it taxis across the airfield (must be booked in advance). See the original Control Tower and evocative Memorial Chapel containing the 848 names of personnel who gave their lives from this airfield. Then continue to the American Military Cemetery at Madingley near Cambridge which commemorates American servicemen and women who died in World War II. Enjoy a walking tour of Cambridge before spending the evening at your leisure.

IWM Duxford and the Shuttleworth Collection

Spend this morning at IWM Duxford, an original Battle of Britain airfield to see the fabulous Imperial War Museum’s aircraft collection and various historic aircraft being restored and flown. This really is Britain’s ‘museum of flight’ with an impressive USAF hanger and memorial and the Land Warfare Museum.

In the afternoon, visit the remarkable Shuttleworth Collection, home to almost 50 historic aircraft and vintage vehicles including the 1909 Bleriot XI; 1912 Blackburn Monoplane; the racing aircraft DH88 Comet; and the Supermarine Spitfire.

After breakfast, travel to the De Havilland Aircraft Museum, the oldest aviation museum dedicated to the preservation of De Havilland Aircraft. The company that helped to shape the world of aviation with its aeronautical innovations including many iconic aircraft such as the De Havilland Mosquito, The Wooden Wonder; the world’s first jet airliner, the Comet; the ‘backbone’ of the RAF’s training aircraft in WWII, the Tiger Moth; and the Airspeed Horsa Glider, used extensively by airborne troops in 1944 during D-Day, Arnhem and the Rhine crossing.

Afterwards, continue to the RAF Museum London with over 100 aircraft on site. See the stunning new exhibition, ‘First World War in the Air’; marvel at the life-sized model of the F-35 Joint Strike Fighter jet (the only place in the world where it is on display!); listen to Winston Churchill give his ‘Battle of Britain’ speech; and check out the ‘Bomb Bay’ television underneath the imposing and evocate Vulcan Bomber.

Discovering London on your own

Private transfer to the airport for your return flight home.

This tour is available for groups.

For individual travellers we can also arrange this tour as a self drive option using a hire car collected and returned in London.

Although the tour is shown as a 10 day tour – we will be delighted to tailor make and adjust this to fit your preferred time scale.

Prices are available on request 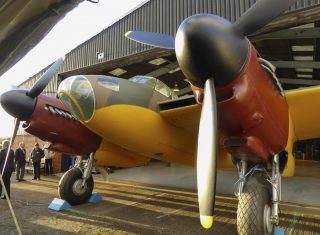