Greenwich is stepped in fascinating history. It is the birthplace of Tudors and the centre of time. Where hemisphere’s meet and  where you can, quite literally, reach for the stars. Explore Greenwich on this spectacular 5 day tour staying  at the luxurious Double Tree by Hilton Hotel.

This incredible tour will allow you to admire the sites of capital from the River Thames. Relax in the majestic Greenwich Park (once Henry VII’s Royal Hunting Park), soar across the Thames in a cable car and through space in London’s only planetarium.  This tour has it all – and time really does fly when you’re having fun.

Cutty Sark:  The world’s largest surviving tea clipper was built in 1989 and has visited nearly every major port in the world.  Delve into the adventures of this iconic ship and meet the colourful cast of characters who tell the story of what life was like on board.

Emirates Air Line Cable Car:  Enjoy spectacular, 360 degree views of London and Greenwich as you soar across the Thames taking in the most famous and popular sights of the capital.

Royal Observatory: Home of Greenwich Mean time and the worlds largest refracting telescope. See the Meridian Line – the centre of the world – and stand with a foot in each hemisphere.

Queens House: One of the countries most interesting buildings and architecturally important,. Queens House is famous for its former occupants and art collection – it even has its own ghost!

Tower of London: Discover the secrets of one of the most infamous fortresses in the world. Uncover what happened to the Princes in the Tower, where Anne Boleyn met her downfall, why there must always be ravens at the tower and see the incredible crown jewels.

Eltham Palace: Once a favoured medieval palace and a Tudor residence, the Palace was transformed into a striking Art Deco mansion by eccentric millionaires . Explore how the state of the art technology and unusual features intertwine with the ruins of the medieval palace.

Looking for something a bit different? Have a look at our Incoming Tours to the UK and Ireland here.

Your private transfer will meet you at Heathrow Airport and drive you to Glorious Greenwich where you stop off at the Cutty Sark; the worlds largest surviving tea clipper, built at the end of the golden age of sail.  Discover what it was like on board the 19th century ship, find out how she brought tea from China and walk beneath the hull that made her one of the most famous ships of her time.

After checking into your Hotel, the Double Tree by Hilton, Greenwich you will have some free to explore the area. Alternatively we could organise a traditional, delicious Afternoon Tea for you at the hotel.

In the evening you will enjoy spectacular panoramic views as your soar across the Thames on the Emirates Air Line cable Car.  Travel from the Greenwich Peninsula to the Royal Docks and see St Paul’s Cathedral, historic Greenwich, The Shard, The O2, the Thames Barrier and the Queen Elizabeth Olympic Park from the heights of 90m. Complete  a full round trip or take opportunity to get off at the Royal Docks and explore the local area. The rest of the evening is free to spend at your leisure.

After a hearty traditional breakfast the hotel you will head to Greenwich Park; part of the Greenwich World Heritage Site and London’s oldest Royal Park with breathtaking views over the River Thames and the City of London. You will spend the day here exploring the famous landmarks:

Royal Observatory: Here you will have the chance to stand with a foot in each hemisphere at the centre of the world – the home of Meridian Line and Greenwich Mean Time.  Explore how scientists first mapped the seas and stars.  Built on the site of  Greenwich Palace, a hunting lodge used during the reign of King Henry VII and designed by Christopher Wren for Charles II in the 17th century, this incredible building is also home to the world’s largest refracting telescope.

Old Royal Naval College: Also built on the site of Greenwich Palace – the birthplace of Henry VIII, Elizabeth I and Mary I, this architectural masterpiece was also designed by Sir Christopher Wren.  Explore the newly conserved Painted Hall; know as Britain’s Sistine Chapel it took nearly 19 years to complete in the 18th century and was used for the lying in state of British hero Admiral Lord Nelson in January 1806.

National Maritime Museum: Learn about Britain’s encounters with the world at sea and the Royal Navy across 14 different galleries. The museum also charts the life of great British hero Admiral Nelson – see the uniform he wore when fatally wounded at the Battle of Trafalgar.

Queen’s House: Packed with more than 400 years of stunning art, architecture and royal history.  This stunning building was designed by Indigo Jones in 1616 as a ‘House of Delight’ for James I’s wife – Anne of Denmark, who unfortunately did not live to see its completion.

After returning to your hotel the rest of the evening is free to spend at your leisure.

Thames Clipper and the Tower of London

After a traditional English breakfast at your hotel you will head to the Thames to take the Clipper to London.

The Clipper is  the London River Bus Service with unparalleled views of the capital – it really is the best way to travel – whatever the weather.  Your ticket will allow you to hop on and off at 23 piers across London and explore some of London’s most famous attractions.

Your first stop is the Tower of London; where you can explore the fascinating history of the 950 year old fortress.  Steeped in gruesome history, the Tower has an infamous reputation for torture and turmoil. Discover not only its gruesome past but hear tales of luxury, banquets, daring escapes, jewels and its past as a Royal Mint and menagerie of royal beasts.  Be sure to take a look at the Crown Jewels, which include some of the most extraordinary diamonds in the world and the Yeoman Wardens – who have resided in the Tower since being given the order from Henry VIII in the 16th century.

The rest of the day will be free to explore London at your leisure – use your Thames Clipper ticket to see locations such as Houses of Parliament, London Eye and the Tate Modern.

After breakfast at the hotel you will be transported back to the 1930s at art deco gem Eltham Palace. Tour the mansions lavish rooms – full of quirky touches from the former owners.  Explore over 19 acres of grounds surrounding the former medieval palace – childhood home of Henry VIII.

You will spend the afternoon at Greenwich Markets; this hidden gem is great for browsing crafts, design, antiques and collectables. These covered markets are surrounded by independent shops, bars and cafes and a perfect way to spend the afternoon.

After a final breakfast at your hotel your private transfer will collect you from the hotel and take you to the airport for you to begin your journey home. 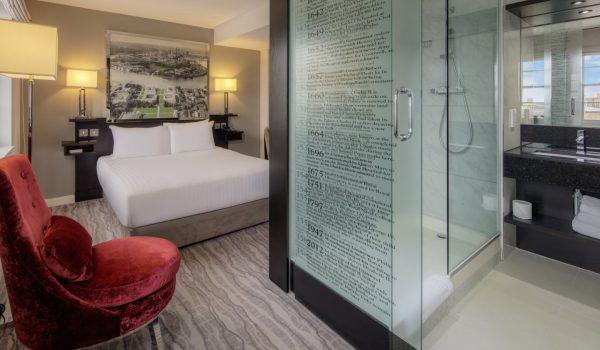 This modern, historic hotel located in the Royal Borough of Greenwich was once a ‘police headquarters’ and had been restored with a contemporary flare while preserving its historic charm.  Guests can enjoy a unique perspective of Greenwich and the capital from the viewing deck on the 8th floor which overlooks the city of London.

The Hilton also offers a unique dining experience at Restaurant Oasis 01; a beautifully restored firearms shooting gallery offering locally sourced ingredients prepared and presented to perfection.  Guests can also unwind after a busy day at Oasis Bar and Lounge, savouring the best wines, cocktails and champagne in Greenwich as well as a light lunch, dinner or afternoon tea.

All accommodation includes a Full English Breakfast each morning.

Prices for individuals (minimum 2 persons) = from GBP £725 per person

Rooms for single occupancy are available and a supplement will apply – please contact us for details.

This tour is suitable for both individual travellers and small groups.

Prices shown are per person. For groups are prices are based on minimum 15 persons travelling together , and for individual travellers, the prices are based on a minimum of 2 persons travelling together. Prices shown are nett and non commissionable and are based on sharing a double or twin bedded room in the hotel. Tours and prices shown are subject to availability. Pictures are for illustrative purposes only. Our website policy is to use only copyright free images or images which have been authorised to us for free use by the owner. If you consider an image to be unauthorised or to be your property, please contact us immediately and if invalid we will have the image removed. If your image requires crediting or is missing a copyright statement then we will be pleased to add this to the webpage, contact us at info@greatdays.co.uk